The Lord blessed the ministry and within a year, land had been purchased, a well drilled for water, a septic tank constructed (by hand), and the mobile home was moved onto the property (close to where the annex classrooms now stand). Pahrump Community Church was officially established April 18, 1969 by filing its Articles of Incorporation with Constitution and By-Laws.

The basement, begun in the spring of 1970, was the first real construction project for the fledgling congregation. Most of the labor was volunteered by church people and local businessmen. Some building material was donated. A military barrack was purchased from the Nevada Test Site and salvaged for the material. The dismantling was slow but all the material was transported to Pahrump for the building program.

The first worship service was held in the unfinished basement in August. The desert wind, blowing through the open end of the partially finished basement, provided the only circulation of air. Floor joists and sub-flooring overhead shaded only two thirds of the thirty people in attendance. It took another seven years to complete the upper structure. Every truss was built and installed by hand.

In 1981, Pastor Norman Sears and his wife Gertrude came to Pahrump to be our Village Missionary pastor. They had a gifted ministry of reaching out to everyone and warmly welcoming all who came through the doors of the church.

In 1991, Pastor Bob Rush and his wife Marj came as Village Missionaries. The Rushes exhibited a tremendous amount of courage, as they demonstrated continual enthusiasm and perseverance in preaching God’s Word despite their medical disabilities.

In 2000, Pastor Dick Bauer, with his wife Georgie, succeeded retiring Pastor Rush. (Prior to becoming the VM pastor at PCC, Pastor Bauer had been our VM District Representative.) They brought spiritual encouragement to us, helping us grow in the Lord and grow in numbers. Under Pastor Bauer’s leadership, we became focused on our purpose in Pahrump: to be an Oasis in a thirsty world offering the hope and joy of knowing Christ, encouraging people in the faith, and enabling them for ministry.

In June of 2005, Keith & Kim Walker (and their two younger children Caleb and Lauri) arrived in Pahrump to serve PCC as Village Missionaries. In 2012, after Caleb had completed his University studies and acquired his Degree in Applied Theology, he was invited by PCC leadership to serve as Associate Pastor.

The most recent construction project has actually been a long work-in-progress. The decision to proceed with a Multi-Purpose Building was made many years ago. The steel components of this structure were delivered in 2005. Over eleven years later, at Christmas of 2016, we reached a point where we began using the new facility for weekly worship services. This project is now complete and we are praising God for His provision!

We have had strong children’s ministry programs throughout the years. These have included (at various times) Sunday School, Children’s Church, Nursery Care, Summer and Winter Camps, Awana, Preschool, Children’s Choir, Child Evangelism Fellowship, Whirly Birds, Vacation Bible Schools, Youth Groups and the Community Christian Academy which is now in its 23rd year. Pahrump Community Church Preschool is one of the longest- running outreach programs in Pahrump, having begun in 1971.

In addition to our children’s programs, we also have several men’s and women’s Bible studies. We are actively involved with a strong missions focus, supporting many missionaries both in the U.S. and international fields.

As we look back over the last 50+ years, we have much for which to be thankful! God has richly blessed our church family! But we do not merely want to look back. We are looking ahead to great things yet to come.

Now to him who is able to do far more abundantly than all that we ask or think, according to the power at work within us, to him be glory in the church and in Christ Jesus throughout all generations, forever and ever. Amen. (Ephesians 3:20–21)

The year was 1968. The population of Las Vegas was about 20% of what it is today. Way out west, Pahrump was a little hole-in-the-wall (poulation: 600+). Electricity was
still new to this small community.

Village Missionaries Richard and Ellen Lynam pioneered the first Protestant Church here and they met in the Pahrump Community Center. Later that year, Village Missionary Paul Faris was the first permanent Pastor of the Pahrump Community Church (PCC). Paul and his wife Geneva, and their five children lived in a mobile home which was first located at Pahrump Mobile Park. The church consisted of the Faris family and a handful of believers from this farming community.

Pastor Faris and Geneva ministered here for 13 years and were beloved by the church and the community. 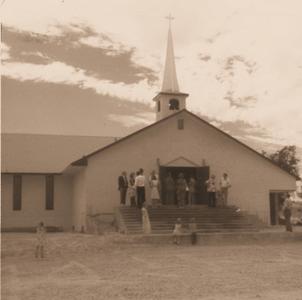